When the companions encountered a plague

One day in the year 639 (CE) `Umar Ibn al-Khattab, the second Rightly-guided Caliph, may Allah be pleased with him, was on his way from Madinah to Jerusalem. The caravan in which he traveled was composed of different groups of people, including Ansar, the Companions of the Prophet, upon him blessings and peace, who were originally from Madinah and the Muhajirun, those Companions who had migrated from Makkah to Madinah. 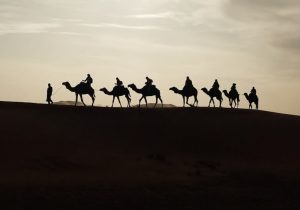 When the caravan reached the valley of Sargh, which was a resting place about 13 days’ journey from Madinah, they were met by Abu `Ubayda bin al-Jarrah, Allah be pleased with him. He was the chief commander of the Muslim army in greater Syria, which was then called al-Sham. Abu `Ubayda bin Al-Jarrah was one of the ten Companions who were promised Paradise by the Prophet, upon him blessings and peace. `Umar Ibn al-Khattab loved Abu `Ubayda bin al-Jarrah and was very happy to see him. This was his second trip to Jerusalem.

Almost two years previously, in April 637, he had made his first trip to Jerusalem to receive the keys of the city from the Byzantine Patriarch Sophronius. The Patriarch had agreed to surrender Jerusalem to Muslims on condition that the Caliph himself should come to receive the keys of the city. The Muslim army under Abu Abu `Ubayda bin al-Jarrah was very happy to receive him then. Two years had passed and he wanted to meet the army again in Jerusalem, so he travelled with that intention.

When `Umar Ibn al-Khattab inquired about the situation in al-Sham, he was told that a plague has appeared in the town of `Amwas. People were dying. They advised `Umar not to proceed further. He called a meeting to consult the Companions. But there was no unanimous answer. Some of the Companions said, “We made our intention and have come out for a purpose and we do not think that it is right to give it up.”  Others advised differently: “You have along with you here in the caravan many people, including Companions of the Prophet, may Allah bless him and grant him peace; it is not right to take them to a place where there is a pestilence.”

After discussion and consulting some of the senior Companions, `Umar made a decision and announced to all the people in the caravan: “I will ride back to Madinah in the morning, God willing, and you should do the same.”

When Abu `Ubayda bin Al-Jarrah heard this, he said to `Umar: “Are you fleeing from the decree of Allah?”

The answer left some people in confusion. What does it mean to run from one decree of Allah to another decree of Allah? Many wished there was more clarity about what to do. At that moment, `Abdur-Rahman bin `Awf, another Companion of the Prophet who was also promised Paradise, arrived. He had been away from the assembly on another business. When he found out what was being discussed, he said, “I have some knowledge about this. I have heard the Messenger of Allah, blessings and peace be upon him, saying: “If you hear about outbreak of a plague in a land, do not enter it, but if plague breaks out in a land where you are, do not leave it.”

Everyone was overjoyed to hear this. The knowledge transmitted from the Prophet, upon him blessings and peace, settled the matter for all. `Umar Ibn al-Khattab thanked Allah subhanahu wa ta`la. The caravan from Madinah returned to Madinah and Abu `Ubaydah returned to his army at `Amwas. Soon after that, the plague spread rapidly. Historians say about twenty-five thousand people died in that plague, including many Companions. Abu `Ubaydah, may Allah be pleased with him, was one of them. Another Companions who died in that plague was Mu`adh bin Jabal, may Allah be pleased with him. Mu`adh was very knowledgeable about the Qur’an. The Prophet, upon him blessings and peace, had said, “Learn Qur’an from four: Ibn Mas`ud, Ubayy bin Ka`b, Mu`adh bin Jabal, and Sâlim, the freed slave of Abu Hudhaifah”. May Allah be pleased with all of them.

They met their Lord / Moving from this land to another

And we remain patient /As our Lord has taught us patience.

WORK WITH THE STORY

WORK WITH THE WORDS

Put the words in alphabetical order. Use each word in a meaningful sentence.

WORK WITH THE NUMBERS

The Qur’an calls us to reflect on the beauty and majesty of nature; we look to read the 'signs' of the natural world. This is really why we explore creation and our place in the cosmos, nurturing awe and wonder in learning.

We learn meaningful knowledge, internalized values, and gain inspiring role models from Islamic civilization and tradition. We look to the past and also to what lies ahead of us, finding our place in the timeline of history.

We believe good deeds and stewardship are essential to our faith. We try to actualize this in our lives and share these values within the Sakinah community. Each of us makes a positive difference in the world.